A Fizzy Ocean on Enceladus

For years researchers have been debating whether Enceladus, a tiny moon floating just outside Saturn's rings, is home to a vast underground ocean. Is it wet--or not? Now, new evidence is tipping the scales. Not only does Enceladus likely have an ocean, that ocean is probably fizzy like a soft drink and could be friendly to microbial life.

The story begins in 2005 when NASA's Cassini probe flew past Enceladus for a close encounter.

"Geophysicists expected this little world to be a lump of ice, cold, dead, and uninteresting," says Dennis Matson of NASA's Jet Propulsion Laboratory. "Boy, were we surprised!"
Posted by blog of grand ambitions at 22:37 3 comments: 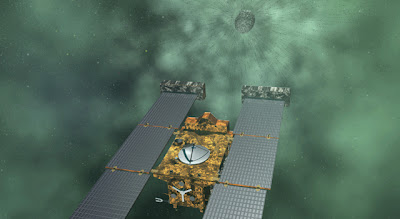 Just one year before its Feb. 14 encounter with comet Tempel 1, NASA's Stardust spacecraft performed the largest rocket burn of its extended life. With the spacecraft on the opposite side of the solar system and beyond the orbit of Mars, the comet hunter's rockets fired for 22 minutes and 53 seconds, changing the spacecraft's speed by 24 meters per second (54 mph). The burn was a result of an international effort to determine something that could very well be indeterminate -- which face of Tempel 1 will be facing the sun when Stardust hurtles by tonight, Feb. 14, the evening of Valentine's Day in the United States.

"Our goal is to re-visit a comet to look for changes that occurred since NASA's Deep Impact mission took a look five-and-a-half years ago," said Tim Larson, Stardust-NExT project manager from NASA's Jet Propulsion Laboratory in Pasadena, Calif.  "We may also see the crater that Deep Impact created in 2005, but because of Tempel 1's rotation, there is no guarantee. At the end of the day, whatever we see there should provide some great new science."

While comets have been observed and postulated on for centuries, cometary science acquired literally "on the fly" is a relatively new field. Since 1984, there have been spacecraft flybys of six comets. Of these, none involved the ability to look for changes that may have occurred as a result of the comet’s orbit around the sun. That is, until Stardust-NExT and Tempel 1 meet tonight.

"You could argue that comet Tempel 1 is the most unique icy dirtball in our solar system," said Joe Veverka, Stardust-NExT principal investigator from Cornell University, Ithaca, N.Y. "Not only does it have many intriguing physical characteristics that fascinate the scientific community, it also has been analyzed and scrutinized time and again from the ground and space."

In January 2007, NASA chose Veverka's plan to revisit comet Tempel 1 with NASA’s already in-flight Stardust spacecraft. Stardust had just completed the mission it was designed for – flying to comet Wild 2, collecting samples of the coma as it hurtled by, and then flying back to Earth to drop off a sample return capsule so scientists could study pieces of comet in their labs.

Ask any spacecraft project manager -- re-tasking a spacecraft designed for a completely different mission is a challenge. To be in the right place at the right time to see changes in surface features on a small celestial body that seemingly changes its rotation rate on a whim and is out of view from observers for most of its five-and-a-half-year orbit about the sun -- that’s something else entirely. But that was the assignment given to Stardust-NExT team members Mike Belton, Steve Chesley and Karen Meech.

"As comets sweep though the inner solar system, they come alive," said Belton, a Stardust-NExT co-investigator from Belton Space Initiatives in Tucson, Ariz. "They belch gas and dust, and this outgassing can not only change their orbits, it can also change their rotation rate."

Determining the comet's rotation rate and which side will be illuminated when is tricky, because the comet had only been seen up close for a short time in July 2005 during the Deep Impact encounter.  From then on, the comet nucleus, about 6 kilometers (3.7 miles) wide, appeared to observers to be little more than a point of light in the sky for even the best telescopes -- including NASA's Hubble Space Telescope. (Tempel 1's orbit takes it as far out as Jupiter's orbit and almost as close as Mars’ orbit.)  But even points of light can bear scientific fruit for astronomers and space scientists. The flattened, oblong Tempel 1 nucleus was no exception.

The plan was for Belton and Chesley to generate comet rotation models independently. What both needed was data (and a lot of it) on the amount of sunlight Tempel reflected and when. Both knew the source for that information: fellow Stardust-NExT co-investigator Karen Meech. Meech, an astronomer from the University of Hawaii, reached out to her network of fellow astronomers around the world.
Posted by blog of grand ambitions at 04:42 3 comments: